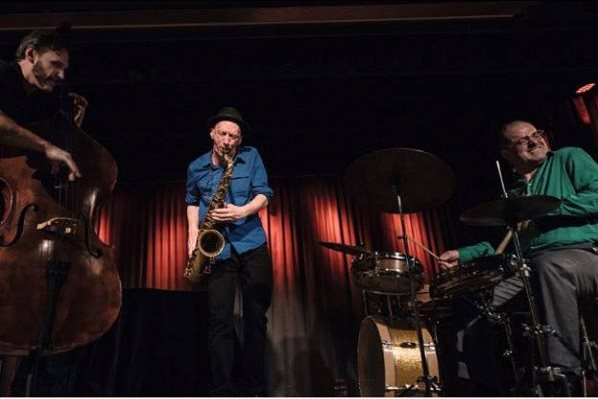 For the past thirty years Ellery Eskelin has been at the forefront of the global creative improvised music scene. Based in New York City, he has traveled widely performing, recording and amassing a very personal and iconoclastic body of work.
Ellery Eskelin (born 1959) was raised in Baltimore and began playing the tenor saxophone at age ten. In 1983 Eskelin moved to New York City and in 1987 began recording with the cooperative group Joint Venture which also began his exposure on the European international touring circuit. In 1992 Eskelin joined drummer Joey Baron’s group, "Baron Down", an experience that proved to be an important catalyst in his own work fostering an increased interest in new and unusual instrumentation. In 1994 Eskelin formed the group most often associated with him including accordionist Andrea Parkins and drummer Jim Black. To date he has written over 50 compositions for this group, each of which has been documented on a series of CD releases on the Swiss hatHUT record label. The band has toured regularly and performed hundreds of concerts in the US, Canada and throughout Europe during the past twenty years.
Over the years Eskelin has developed a number of other important associations with musicians such as Gerry Hemingway, Mark Helias, Sylvie Courvoisier, and Bobby Previte. As a side-person Eskelin has worked with a broad cross section of jazz, avant-pop and new-music figures such as organist Brother Jack McDuff, composer Mikel Rouse, guitarist Eugene Chadbourne, oud player and composer Rabih Abou-Khalil, drummer Daniel Humair and the pseudo-group "The Grassy Knoll" among many others
Eskelin's recordings as a leader and co-leader (there are currently twenty six) have been named in Best of the Year critics' polls in the New York Times, The Village Voice , and major jazz magazines in the US and abroad. He also appears on over fifty recordings as a side person. DownBeat Magazine named Eskelin as one of the 25 Rising Stars for the Future in its January 2000 issue as well as including him in their Annual Critics Polls nearly every year since then. Eskelin was a nominee for the prestigious Danish Jazzpar award in 2003 and was the recipient of a Chamber Music America French-American Exchange grant in 2007 and in 2014 as well as a Chamber Music America New Jazz Works grant in 2009.